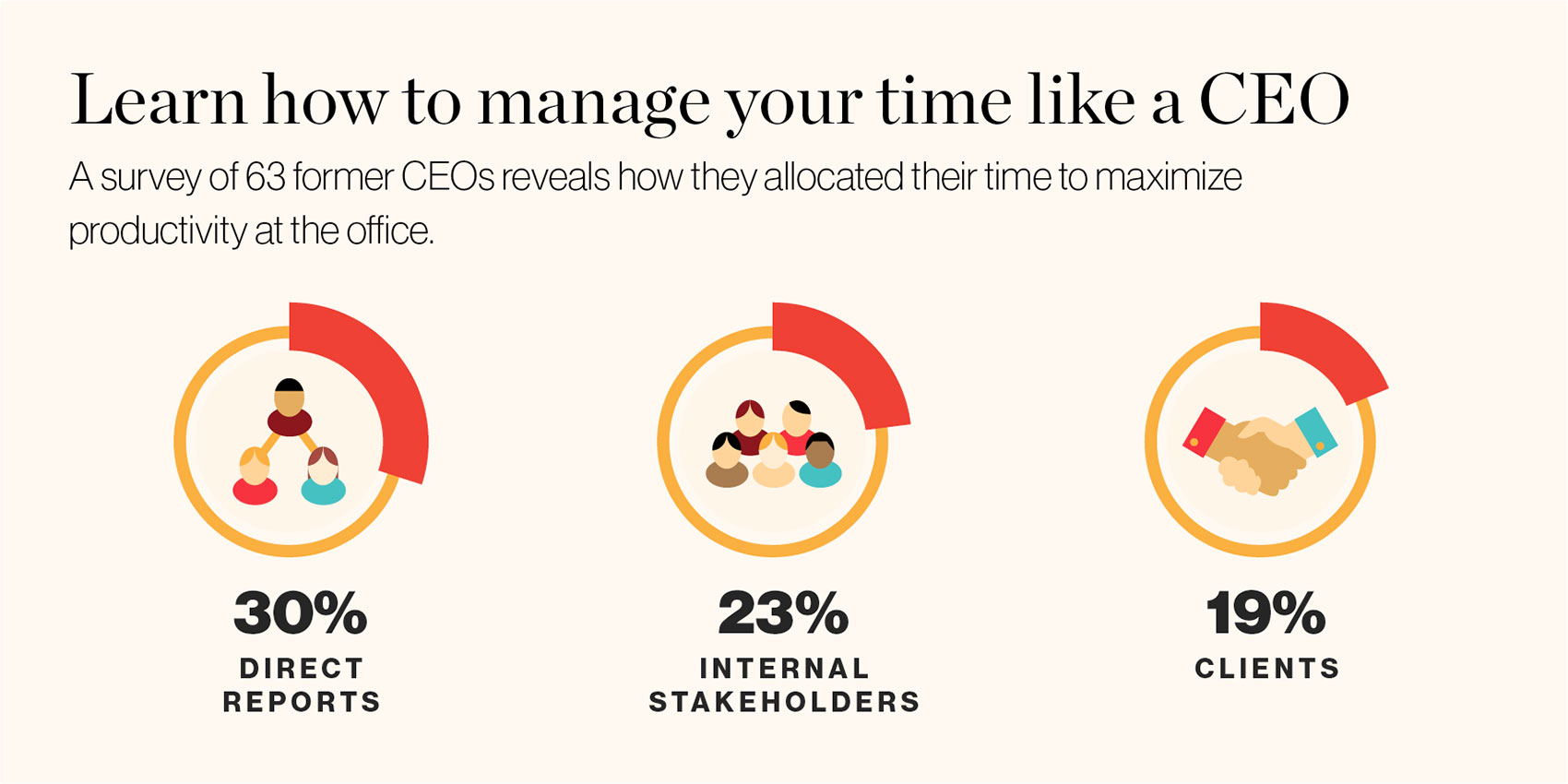 Whatever your professional goals are for the New Year, now is the time to reset priorities and plan how to maximize efficiency and effectiveness. And for guidance on what smart time management looks like, turn to those with a proven track record: the C-Suite. The GLG Institute sought expert advice on time management from 63 former CEOs from some of the world’s most powerful companies.

The GLG Institute is a membership-based learning community that pairs rising business leaders with prominent former executives for mentorship, networking, and counsel. Here’s what we learned when we asked 63 former CEOs about time management and productivity:

Pay attention to how you allocate your time. Reporting structures and responsibilities are different for every CEO but there seems to be consensus on how and whom to manage. The former CEOs in our survey spent an average of 30% of their time with their direct reports. But many respondents also felt that they had too many direct reports and could have been better managers if they had no more than ten direct reports. Respondents spent 23% of their time with internal stakeholders in their company and 19% of their time with outside clients. However you allocate your time, it’s important to do periodic pulse checks. Talk with HR, with your manager, and with your direct reports to be sure your reporting structure makes sense for you and your colleagues.

Make time for learning and networking. We asked, “What’s the one thing you wish you’d done more of during your time as CEO?” The number one answer was external networking. CEOs have to share their time across countless internal stakeholders but that doesn’t mean they can afford to stop meeting and learning from people outside of their organizations. Unfortunately, adding more cocktail parties to your schedule isn’t going to cut it. Networking should be about learning and asking questions – about people, companies, and new ideas, within your discipline or across fields. So be smart and most importantly, be proactive. Find the rooms with the exact people you want to learn from and seek them out.

Don’t skimp on sleep. Science has proven that brains cannot function optimally without sufficient sleep. But studies show that 30% of Americans don’t get the sleep they need. Successful CEOs know sleep is one thing they can’t live without when the stakes are high. In our survey, more than 90% reported averaging at least seven hours of sleep as chief executives.

Find your productivity sweet spot. Productivity and energy levels peak at different times for everyone, so it is important to know when you feel most productive and then plan your days with that in mind. More than 75% of respondents said they were most productive in the morning and made sure to capitalize on that time before their energy and focus started to fade. So train yourself to become a morning person if you’re not already. There’s a good chance the senior managers at your company are getting their best work done then.

Know your daily priorities. Morning routines depend on many factors often outside our control – families, commutes, job functions. But understanding key goals and reviewing overnight emails makes it easier to prioritize the right things during the day. 35% of respondents said the first thing they did at the office was review their daily schedule and 27% said they read through their inbox.

Take a break when you need it. Technology enables us to work even when we’re not at our desks. We’re constantly accessible by phone and email and it often feels like we can’t escape our screens. But studies show that the most productive people take periodic breaks throughout the day; specifically, 17-minute breaks for every 52 minutes they work. Multiple 17-minute breaks throughout the day may not be realistic for everyone, but even CEOs take breaks from time to time. Every CEO we surveyed said breaks are crucial to success. More than 75% of CEOs in our survey incorporate physical activity during their breaks, either by exercising or taking a walk. And if walking works for you, try the walking meeting.

No path to the C-Suite is the same but one thing is universal: professionals on the rise are not always in a position to control how they spend their days at the office. But everyone can benefit from being thoughtful about time management. There isn’t necessarily one right or wrong way to do it. Instead, it’s important to periodically check in with yourself and ask: Am I making the best possible use of my time?