What You Need to Know About the Red-Hot SPAC Market

The year 2020 was the year of the SPAC (special purpose acquisition company), also known as a blank check company. These public companies exist strictly as vehicles to raise money to take other businesses public through a merger or acquisition. For example, Richard Branson’s Virgin Galactic turned to a SPAC to go public in 2019.

Last year, SPACs became the knights in shining armor. A frozen IPO market, low interest rates, the need for cash, and other factors created a perfect storm for money to be pumped into SPACs. The yields inherent in the SPAC when you buy in the IPO as well as the flexibility of the warrant are significant factors leading to this major cash infusion and almost nonstop flow into the SPAC vehicle. SPACs offer a quicker way to market and deal certainty, things that were needed last year, specifically during the pandemic. That said, the pandemic accelerated what was likely to eventually happen.

There were 248 SPAC IPOs last year with proceeds of $83.4 billion — significantly more than every other year combined. This year is already on track to surpass that, with close to 150 SPAC IPOs in the first six weeks of 2021 that are approaching $50 billion in value. On average, the enterprise value of business combinations relative to the amount in trust for these deals is 7.5x. We’re seeing larger deals that are able to absorb the dilution in the SPAC.

The 69 total business combinations that have been announced and are yet to close are trading at an average of 65% premium to trust. A lot of people are caught up in the SPAC craze, and that’s leading to some of these higher premiums. Then there are about 330 SPACs searching for business combinations with about $135 billion of capital. This is too much capital chasing a limited-target universe. SPAC IPOs will most likely end the year outpacing traditional IPOs.

The hottest space for SPAC IPOs is EV/mobility, with $55 billion of value invested. Of the teams that have closed and announced deals in the space, most are actually not focused in the space. They have no experience whatsoever there, and they’re just latching onto a hot sector and hoping that they strike a deal that resonates. The market’s so speculative now that everyone looks good, with share prices to match. For example, an air taxi company, Archer Aviation, was valued at $100 million last July. The deal value of its recently proposed SPAC combination is $3.8 billion. That illuminates the issues of competition and pricing in this space. 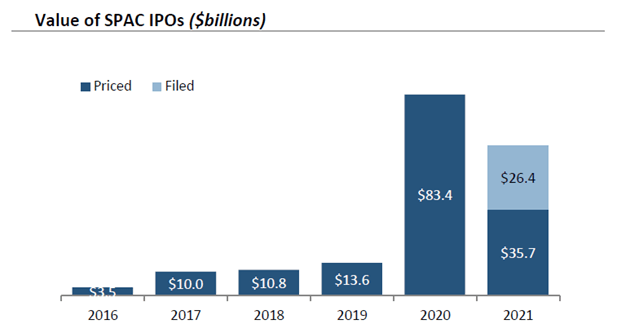 But overall, we’re seeing positive and strong momentum from these announced deals trading higher. So the teams that close these successful deals go back and do another SPAC, and they have a reputation to close a good deal. This positive feedback loop will continue for a little while, and that may be what’s fanning the flames.

Here’s what you have to know about SPACs, along with their benefits and challenges.

“Promote” as a Differentiator

“Promote” is the 20% compensation that SPAC management gets to do a deal. A lot of people talk about this as being the misalignment between management and the investors. In the past, SPACs didn’t often part with promote. They held on to their 20%. If they did, they would use it to attract a company to consider going public through a SPAC, since SPACs were not the favored vehicle to do so. Promote would be used to pay more to give them part of the insider shares, to decrease dilution. Now what we’re seeing is promote is used to differentiate a SPAC from another SPAC, as there are sometimes 15 to 20 SPACs circling the same company.

Essentially, it’s a deal sweetener between companies that may be similar. A recent example of this was DraftKings’ IPO, the best-performing SPAC in recent memory. The team did it by giving up and contributing a portion of their founder’s equity.

The Gradual Fading Out of Warrant Structures

Warrant structures allow people to buy shares at a certain price. In the past, SPACs would always have to offer a full warrant. Once private equity (PE) started getting involved, we started seeing a third or half of a warrant. As SPAC teams have gotten better, they can get away with lessening the dilution significantly. Now we’re seeing a fourth or fifth of a warrant, or none at all. If investors are oversubscribing and willing to get into this deal without a warrant, we’ll see that trend continue. It’s likely that, at the end of 2021 or in the near future, there will be a gradual fading out of warrants.

There’s a Window on SPACs

The SPAC structure favors management teams. But when they don’t have a deal at the end of their two-year window, their last resort is to liquidate. There’s little risk for investors who park money in a SPAC. At the end of the period, they can receive their cash and trust back, plus a little bit of interest. They can also hold that warrant as an option, which will have value. This is why a SPAC’s management is motivated to close any deal possible. The fact that we’re seeing zero liquidated SPACs in 2021 means there are probably a fair number of deals that are not suited for public markets. Hopefully, that liquidated number goes up and management teams stop forcing deals through, because that will reflect poorly on SPAC trading in the long term.

There are clear advantages to SPACs in the PE space, not to mention the capital. SPACs complement existing funds, and PE firms have top operational financial talent, in-house resources, and infrastructure, and have pools of liquid capital. That gives them other options with more companies. That’s why almost every PE fund has launched a SPAC. There’s also advantages for the target company, in that it knows, no matter what, there’ll be cash available for the transaction.

The jury’s still out on public investors. The advantage of a PE fund to a public investor, two years ago, was that the deal was guaranteed to go through. The landscape has changed. Independent teams not backed by PE are actually very good. So is there actually an advantage to someone investing in a SPAC, whether it’s backed by PE or not? Looking at some of the data points, the answer is not really. Share prices are about the same for either. While PE is good, with larger values and multiples, it doesn’t always mean the stock will trade better.

Where SPACs May Go Next

The SPAC space is crowded. There are many deals targeting a limited number of good companies, with incredible saturation in certain spaces. Instead of a company getting series D or E or F financing from venture capital, it’s taking a back route to go public through a SPAC. SPACs are almost competing with venture companies and PE firms among other SPACs. The competition will be fierce. Only one SPAC will win out with each company. The rest will go home empty-handed and have to find another deal.

So SPACs are tapping into different sources. They’re going to earlier-stage companies, which are not ready to go public normally, because the market is a little irrational. There will be fallout from this. A consequence of these deals happening too early is they’re generally light on due diligence. There’s no rigorous process to go public via SPAC. It’s straightforward and fairly easy. Some of these companies are not suited to be a public company, for a variety of reasons. They’re riding on temporary momentum.

Benjamin Pell is the Founder and Managing Partner of Verdene Group LLC (VG), a private investment company that acquires and builds businesses through strategic platforms. Verdene Group operates three integrated business segments: Private Platforms, Public Platforms, and Strategic Alternatives. Mr. Pell leverages an extensive network of partnerships with best-in-class executives and operators as well as institutional and independent capital providers to deliver an opportunistic approach to acquisitions. More specifically, Mr. Pell creates and structures platform strategies that may acquire businesses through a variety of methods including leveraged buyouts, take-private transactions, minority financings, consolidation/rollup, take-public financings, the formation of special purpose acquisition companies (SPACs), or through deal-specific, custom structures. Overall, VG platforms present an alternative strategy to unlock value and propel growth in both public and private businesses. Additionally, Mr. Pell works in collaboration with private equity groups, hedge and venture funds, investment banks, family offices, and select management teams to evaluate, create, and implement alternative investment strategies with a focus on SPACs. He has significantly contributed to the adoption and growth of the vehicle within the private equity arena, having developed and structured over 20 custom vehicles in this regard. He has 15-plus years of investment experience — including more than 12 years of deep expertise regarding SPACs — and has successfully closed over 25 business combinations for ~$5 billion in transaction value.