On Monday, March 9, the stock market crash of 2020 began, with the Dow Jones Industrial Average plummeting 2,013.76 points. At the time, this was the Dow’s worst single-day point drop in U.S. market history. More bad news was to come. A few days later, on March 12, the Dow fell a record 2,352 points, followed by another crash on March 16, when the Dow lost 2,997.10 points. This, combined with the S&P 500 Index hitting a record low on March 23, threw markets into a tailspin.

GLG wanted to understand how these roiling markets – and how COVID-19 itself – was impacting the revenue and operations of large global businesses. Leveraging GLG Survey capabilities, our in-house research professionals surveyed 100 C-suite executives to unearth concerns, forecasted impact to demand, and changes due to supply chain disruptions.

To help analyze the survey’s data, we asked Jeff Kindler, GLG Council Member and former Chairman and CEO of Pfizer, to contribute his expertise. Jeff presented the complete data and his analysis over the course of the four webcasts. This article features a few takeaways from the survey and webcast series.

GLG was especially interested in gauging changing sentiment over time, so we fielded the survey to the same audience four separate times.

Survey respondents included a wide variety of titles across the C-suite, from companies distributed geographically across the country.

According to our survey, industry leaders believed the perceived (how the press and the public-at-large views that impact) and actual (how they believe it, in fact, plays out) impact of COVID-19 was greatest at the global level, as opposed to their estimate of its impact on their industry. 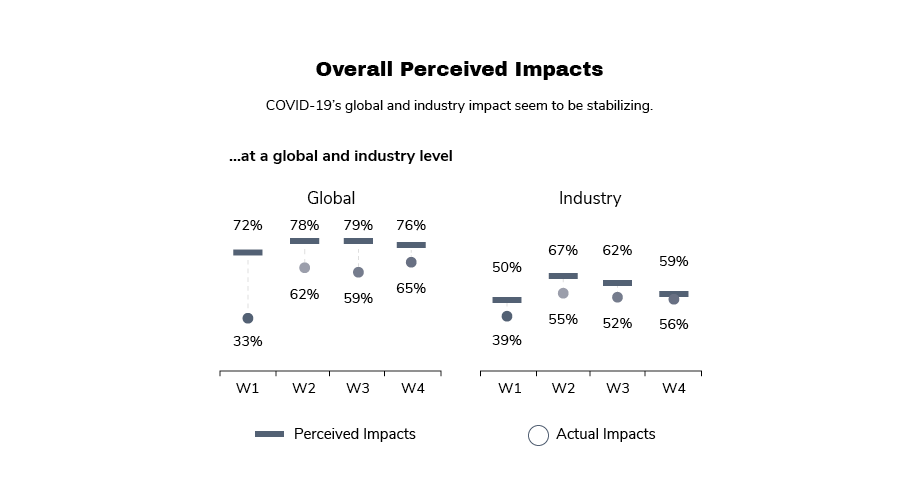 By wave four of the four-part survey, numbers seemed to be stabilizing, with concern about the actual impact of COVID-19 rising to the point where it converges with the perceived impact at the industry level.

While the executives we surveyed do not expect to get to even 80% of normal until at least late Q4, they said they believed recovery will start with the lifting of stay-at-home orders and continue through the reopening and restarting of the domestic and international economies. 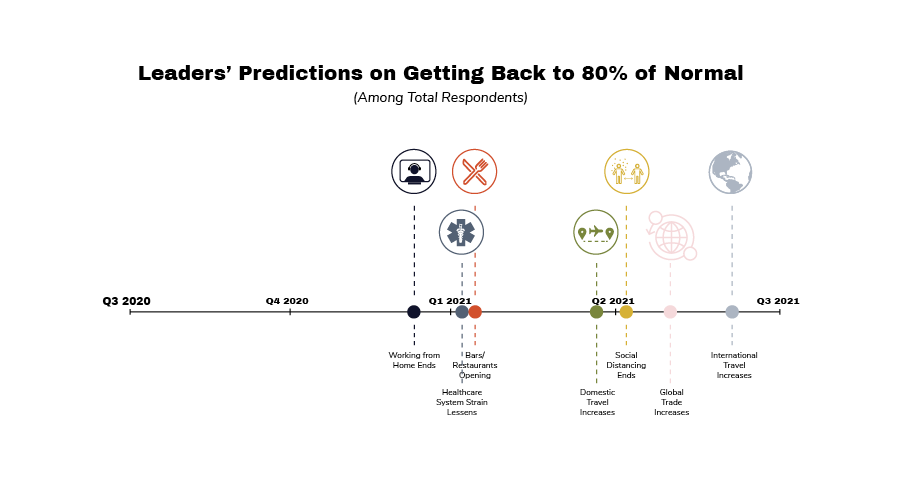 Regarding demand, the perception that it would be outright lost started out small, with just over a quarter of respondents fearing that demand was gone forever. But as the pandemic and the resulting shutdown persisted, the fear that demand was lost rose and then – in what might indicate a glimmer of hope – stabilized.

Like the fears concerning lost vs. delayed revenue has grown, the anticipated recovery time has also grown since the pandemic’s early days. In April, executives expected a 7-month recovery time, a number that grew to 16 by the time the final survey was fielded.

Reasons to Be Anxious

During the final webcast on May 4, Jeff Kindler reminded us that during the time we were fielding the last wave of the survey, “unemployment claims were rising, the Payroll Protection Plan was being rolled out in a somewhat bumpy way. There was a great deal of discussion at the time about reopening by different governors and in other countries, as well as some discussion about potential treatments and vaccines. So it was probably a time in which the initial shock of this experience had reduced to some extent, but at the same time there was some very challenging experiences that everybody was settling into and … we’re going to have to face for some period of time …” All of which may have contributed to the rising anxiety measured by these numbers.

GLG keeps you updated on the latest insights from experts on the impact of COVID-19 across
multiple sectors.

Get the latest from the world’s insight network