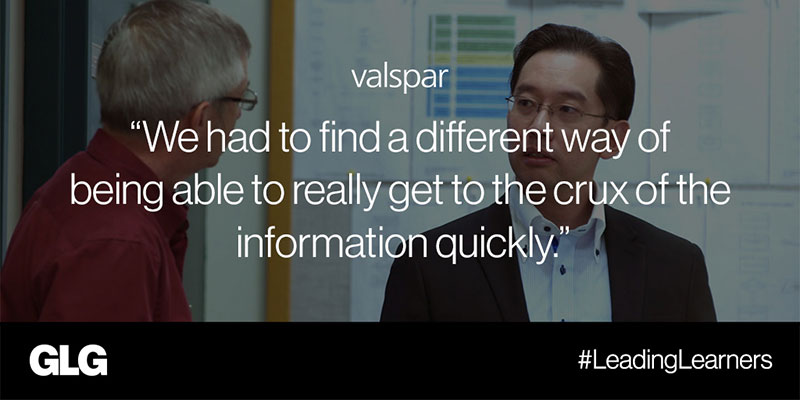 Even 15 years ago, combining video and marketing meant commercials. Doing them can be expensive, elaborate, and remarkably inefficient. As video moved far beyond the TV screen, it gave marketers new options to engage clients, employees, and others. This is especially important for B2B marketing, where traditional commercials are essentially useless. But these developments don’t make doing video well – and affordably – any easier, as we learned while developing GLG’s “Leading Learners” series, which features top executives at great companies sharing how they approach learning in their work. And as one of GLG’s first major foray into video, we were focused on making the most of our dollars. Along the way, we found some creative ways to keep the return on our video investment high. Here’s what we learned:

Boost ROI By Reducing The Investment

A good digital video campaign often comes with a hefty price tag. Each component of the process – from cameras to lighting to travel to production crews – adds up. For many businesses, this might deter even considering video. But by significantly reducing upfront costs, the campaign can be better positioned to generate an impressive ROI in the end.

We kept costs down by bringing things in-house. It avoids the big budgets, fees, and markups that come with agencies or other external vendors. You only need a small team – we commissioned a consulting producer to oversee the project with help from our in-house project manager. You can keep costs down and add value by hiring a younger auteur who understands the digital space and social platforms. Assume the executive producer role yourself. Since you know the company best, the role will benefit from your intimate knowledge of the brand and campaign objectives.

We also found that buying instead of renting our video gear was a great investment. Once you’re making more than a few videos, owning adds tremendous value by avoiding rental markup and making the team nimble.

Except for Super Bowl week, commercials are a necessary evil of TV-watching, not something people watch by choice. A video simply about how great your company is will not attract, retain, or move viewers. So make something people want to watch, something that will add value to their work or their lives.

Our series, Leading Learners, doesn’t try to sell what we do. Instead, we’re interested in telling the stories of how innovative companies learn. The videos touch on how these people work with us, but that’s almost the least interesting thing about them. Finding the fine line between interesting and advantageous content may seem challenging, but achieving that balance will have a dramatic impact on the performance of the final product.

The videos themselves don’t need to be the only outputs from your creative work. For instance, the cutting room floor can make for secondary videos, supplementary b-roll footage, or pithy social media content. We’ve used such material for internal training, and drawn on lessons from interviews for op-eds and our website. And, the more you can integrate video content into your company’s workflow, the more direct results you’ll be able to point to from the initiative.

Proper Preparation Makes All The Difference

Creating videos is a time-intensive task – from production to shooting to editing, a lot of labor goes into building a high-quality final product. To reduce the timeline, as well as to streamline efforts, preparation is critical. Develop an end goal and be as specific as possible about the details upfront. Outlining in advance the story you want captured, the shots you want to film, and the questions you want to ask an interviewee all help your shoot move quickly and efficiently. By having these things on hand, you can better control the content you’re capturing during the shoot and make sure that the editors have enough to work with to compile the final product.

It’s easy to rely on simple marketing metrics – such as views or clicks – in tracking the results of your campaign, but that view can be way too narrow. A campaign judged by clicks alone may be deemed successful if it generates 10,000 views in a week. But if none of those 10,000 views are the people you want to reach, they don’t help you much. But if 200 people view your video and 15 reach out to your company, you’re actually #winning and your efforts are paying off.